Hardcover, 352 pages
Expected publication: August 29th 2017 by Sourcebooks Fire
There are various reviews roaming the internet about this book.  I don’t think any had an issue with representation though, so I decided to give this book a try.  The first chapter was amazing!  Then it took a step back and did character introductions and a bit of world building, but then we were thrown right into the competition.  Non-stop action, revelations, and exploring genderfluid as an accepted form of identification.  While this story may not be new territory (think Hunger Games and Throne of Glass), I enjoyed the author’s writing style and the characters presented.
I’ve already started passing this around to friends because I need someone to talk to about this book!  I also went ahead and pre-ordered a final copy to have another one to loan out.  There is a cute pre-order incentive, which you can find here, and it enters you into a grand prize drawing with all kinds of exciting swag 🙂 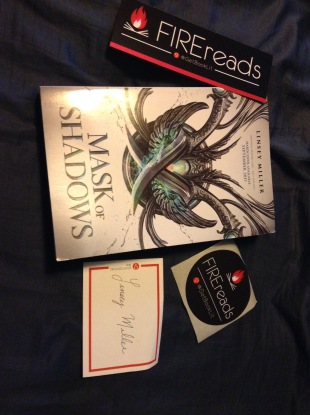 So, this has nothing to do with how I feel about the story contained within, but I do want to mention that Sourcebooks Fire outdid themselves with a really fun promotion that involved social media outreach, prizes, and great emails to the “auditioners” who participated throughout.  I did win a random prize for an arc, signed bookplate, and stickers (which in no way affected my honest review), and the creative mask challenge was a neat addition.  Here’s my entry!  Thanks for putting all that together Sourcebooks Fire!! 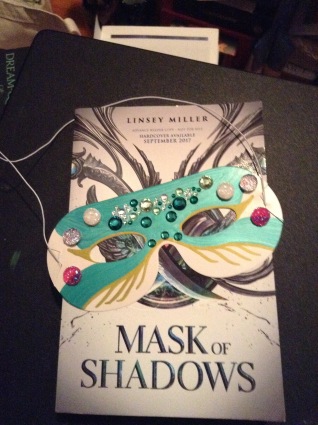 Sallot Leon is a thief, and a good one at that. But gender fluid Sal wants nothing more than to escape the drudgery of life as a highway robber and get closer to the upper-class and the nobles who destroyed their home.

When Sal Leon steals a poster announcing open auditions for the Left Hand, a powerful collection of the Queen’s personal assassins named for the rings she wears — Ruby, Emerald, Amethyst, and Opal — their world changes. They know it’s a chance for a new life.

Except the audition is a fight to the death filled with clever circus acrobats, lethal apothecaries, and vicious ex-soldiers. A childhood as a common criminal hardly prepared Sal for the trials. But Sal must survive to put their real reason for auditioning into play: revenge.

3 thoughts on “Waiting on Wednesday: Mask of Shadows by Linsey Miller”