As promised, here are some signatures collected from past ARCHONs!  It’s always exciting to see who the writer/artist guest of honor will be and then to meet them in person.  My earliest favorite author, Tamora Pierce, attended a couple years back.  I went to almost every panel she was on and even invited her to my bachelorette party.  Unfortunately, although she agreed to make an appearance that night, she was not feeling well.  Instead, she sent her assistant with a lovely note apologizing and congratulating me.

END_OF_DOCUMENT_TOKEN_TO_BE_REPLACED 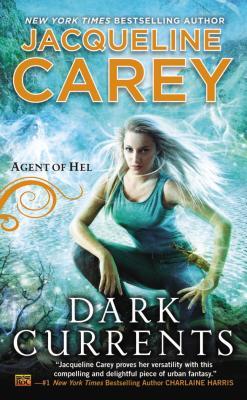 Finally finished this one! I was trying to read it before ARCHON (beg. of Oct.), where I had a chance to meet the author, but only made it five chapters in before the event. When the Kushiel series first came out, I was not a fan as the subject matter didn’t sit well with me in high school; however, I find myself wondering if now might be a good time to try again since I really enjoyed Dark Currents! Once I had time to just sit and read, this went really quick. I’m not sure I can say that this urban fantasy does anything particularly different or wonderful that other authors haven’t already done, but I did enjoy the story. And the characters were a lot of fun 🙂 I look forward to reading the rest of the series, and maybe it will get better as it ages. Here’s what you need to know!

Cons:
Almost all the men mentioned were “hot” or attractive
Most of the women were as well
Mystery element was a bit weak

Overall, this is a fun, fluffy read (although the subject of rape does come up), and I found myself enjoying the story. I think my favorite bits would have to include the lamia/horror starlet, the portrayal of ghouls, and the pop culture references. Maybe not a series for everyone, but definitely give it a try.

Ad: Additional reading (There’s something better out there.)

The Midwestern resort town of Pemkowet boasts a diverse population: eccentric locals, wealthy summer people, and tourists by the busload—not to mention fairies, sprites, vampires, naiads, ogres, and a whole host of eldritch folk, presided over by Hel, a reclusive Norse goddess.

To Daisy Johanssen, fathered by an incubus and raised by a single mother, it’s home. And as Hel’s enforcer and the designated liaison to the Pemkowet Police Department, it’s up to her to ensure relations between the mundane and eldritch communities run smoothly.

But when a young man from a nearby college drowns—and signs point to eldritch involvement—the town’s booming paranormal tourism trade is at stake. Teamed up with her childhood crush, Officer Cody Fairfax, a sexy werewolf on the down-low, Daisy must solve the crime—and keep a tight rein on the darker side of her nature. For if she’s ever tempted to invoke her demonic birthright, it could accidentally unleash nothing less than Armageddon.  (From Amazon.com)

This past weekend I attended ARCHON 39 in Collinsville, IL with a group of friends.  We’ve been attending this convention for several years now, and it’s always exciting to see the guests of honor and meet new (potentially favorite) authors, artists, and filk musicians.

Recently, I’ve been collecting author signatures for my book collection (SASEs for signed bookplates and whatnot) and compiling the fun extras all together in one book for safe keeping/showing off.  Maybe I’ll do a series of posts about those signatures and the stories of how I collected them, but for now, I want to share my ARCHON scores.

This year’s Author Guest of Honor was Jacqueline Carey.  I met her for the first time back in January at ALA Midwinter in Chicago, but she had several panels at ARCHON, which were very informative.  I also didn’t have to compete for a seat or wait in line very long at her signing.  I have to confess, when I first tried to read the Kushiel series, I was put off, but I think I might like it better if I wait a little longer to try again.  In the mean time, Agents of Hel started off nicely.  And, I look forward to reading more of Carey’s urban fantasy.

Rachel Neumeier is a local author that participates on multiple panels yearly, so I’ve actually met her before.  This year we had a great conversation about writer’s block, perfectionism, and getting words onto the page, which made me want to get started on writing again!

Glen Cook is an unknown author to me, but is actually a very prolific writer.  He’s probably best known for his Black Company series, and I now own the first three books in omnibus form.

So, I’ve been really excited for The Dinosaur Lords for several months, but due to budget and time constraints have not had a chance to read it yet.  Earlier last week, I had an AHA! moment when planning my ARCHON schedule.  The Masquerade MC is always the same person, and that person is VICTOR MILAN, author of The Dinosaur Lords.  Took me long enough…  Anyway, he’s pretty awesome and liked that I brought bookplates for signing since I couldn’t afford the book right now.

This last group of signatures are not book related.  These are S.J. Tucker, BetsyTinney, and Alexander James Adams from the filk group Tricky Pixie.  This was my first time hearing any of their music, and I fell in love with the lyrical songs and the group’s energy.  You could tell they were excited to be there and to play for us.  I believe you can stream music on their website before you buy anything, and it’s definitely worth listening to!

Overall, I had a great time meeting new authors and musicians as well as catching up with area friends.  I can’t wait for next year’s convention!!

P.S. One of the booksellers had signed books tucked in amongst her regular stock, and I picked up a signed copy of Mike Shepherd’s Target.