The last leg of my book convention adventure!!  I was incredibly exhausted when I returned home, so this post is a bit late 😦

Saturday was full of bright spots but was also cluttered with messy planning and horrible lines.  The system for handing out wristbands for author signings was not well policed, and so I was able to only collect one wristband.  (More on that later though.) 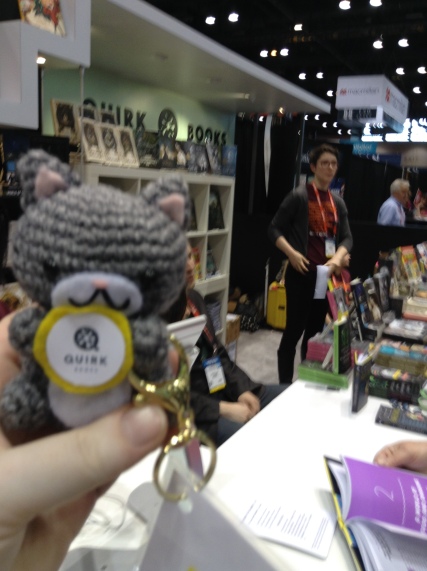 The morning was fairly relaxing as I didn’t have anywhere I needed to be, so I wondered the floor, listening to what people were excited about.  I got into line at the Owlcrate booth (nice long line all day long by the way) and spun the wheel to win an adorable notebook and an Owlcrate tote (so cute!).  Then, I went on a hunt to QuirkECat to enter Quirk Books’ Twitter/Instagram contest and found all four pretty quickly and took my pictures.

At the Anderson’s Bookshop booth, I found a signed copy of Dawn Kurtagich’s The Dead House, which was an amazing story.  The Blue Star Coloring booth was selling their adult coloring books at a discounted price.  There were so many things to see and do.  I sat in on several talks at the Uptown Stage, but my favorite was Truth or Dare with Leigh Bardugo and Marissa Meyer.  They have some awesome chemistry and are a hoot to listen to. 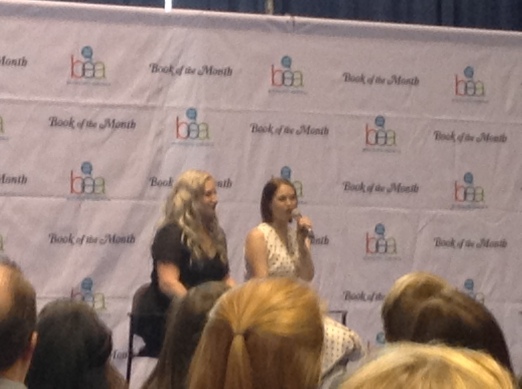 Which brings back to the wristband signing.  So I knew that Sarah J. Maas would run out of space quickly, so I got in line for Victoria Aveyard.  But, she was out by the time I reached the front of the ridiculous line, so I finally got a place in line to see Marissa Meyer and have her sign my bookplates!! 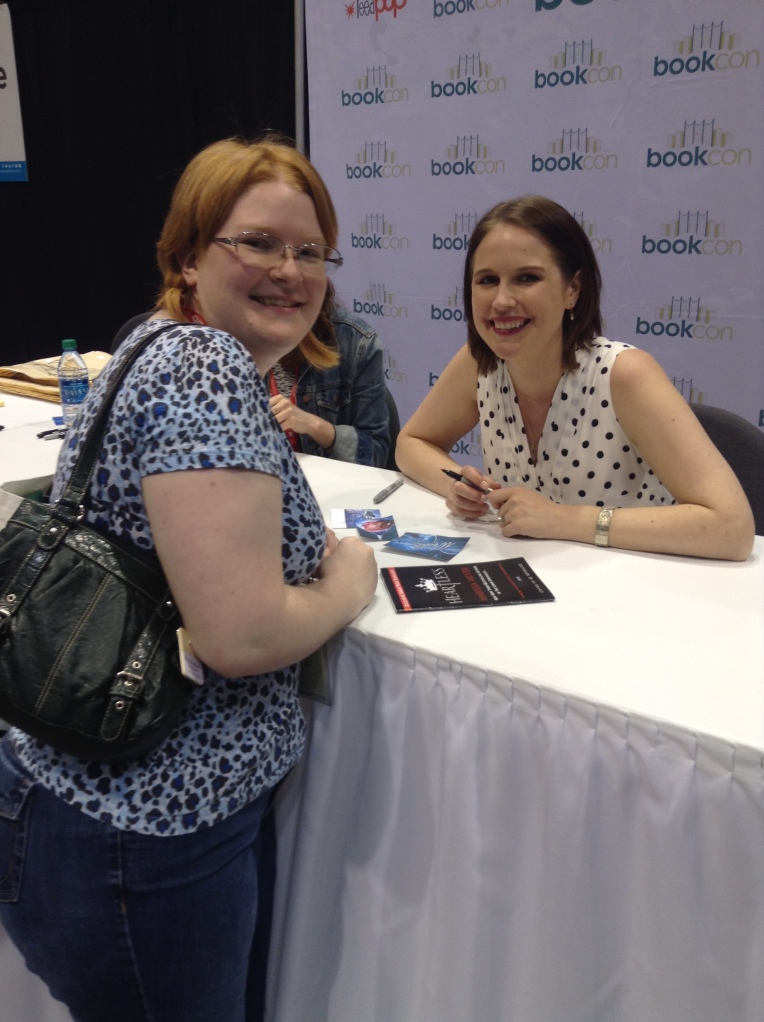 She really is quite sweet, and I can’t wait to read her new novel, Heartless.  Well, first I should probably finish Winter, but I don’t want the series to end.  So soon, I will read it soon.  Immediately after leaving Marissa’s line, I went to join the line for Jay Kristoff and Amie Kaufmann.  That line was huge.  It went on for two hours, long past the stated close time.  I guess that was partially because they were signing the sequel to Illuminae, Gemina, but I was completely unaware at just how popular that series had become.  CRAZY!

Once, I collected my signatures, it was far too late to go to the last panel on my list, so I did a little more wandering the show floor.  While doing so, several booths were starting to give away their books as they didn’t want to pack and ship them back to their office.  I collected a few fun titles for other people and a couple for myself.  By then, I was completely wiped out from the whole week’s experience and the crush of people.  And I still wasn’t finished!

Anderson’s Bookshop in Naperville was hosting a signing with Sarah J. Maas, and I was going to be there.  Sarah was lovely even as I had her tearing up when I thanked her for writing such genuine representations of hopelessness, PTSD, and depression in A Court of Mist and Fury.  Truly touched my soul, and now I have a fully signed collection of her work up to this point. 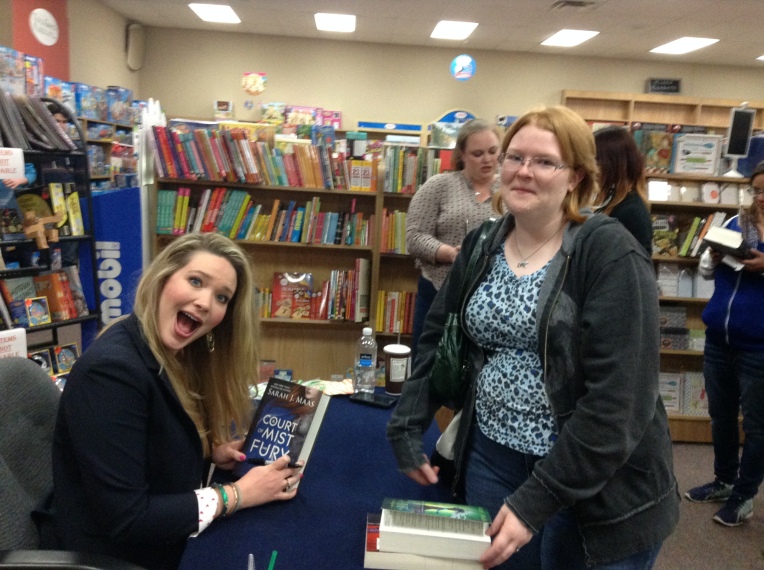 The day ended on a great highlight of the week, and I certainly enjoyed learning more about the book industry.  Hopefully, I’ll get to repeat the experience next year in New York 🙂  I wish you all the best!

So I definitely overestimated my ability to do everything and still come back to blog about it.  But, I still plan on sharing what I learned for each day, even if they aren’t posted the same day. 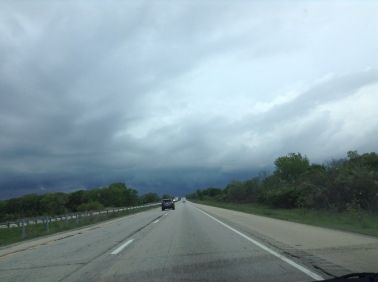 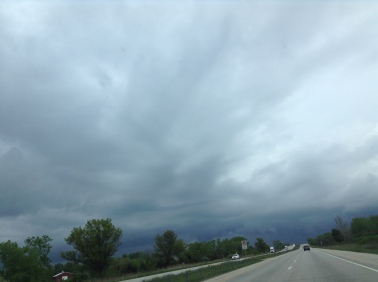 My drive up was mostly uneventful.  I did get a little worried when the skyline grew super dark in front of me, but except for some short periods of downpour, I had missed the storms.  YAY!!  Check in went quick, and I had my stuff laid out and ready to go for Day of Dialog.

The next morning shrouded the city of Chicago in mist and fog; it was almost cloying actually.  But it didn’t last past noon.  The keynote speakers for the School Library Journal’s Day of Dialog were Richard Peck and Laini Taylor. 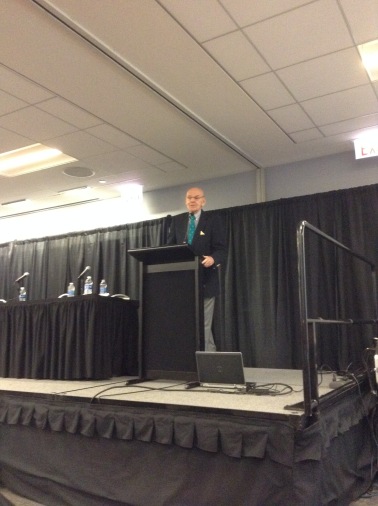 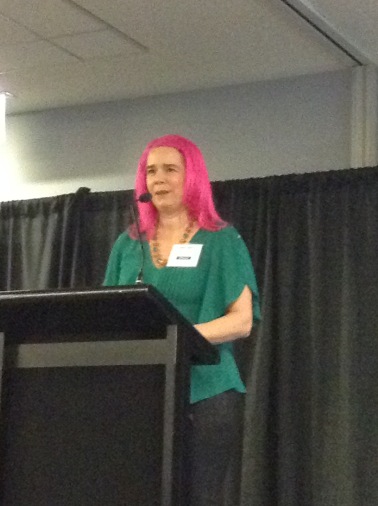 They were fantastic!  Both of these people were a joy to listen to, and it’s no wonder that they are awesome storytellers.  I could have listened to them all day.  BUT, the day was super filled with publisher pitches and authors/illustrators speaking on several different topics. 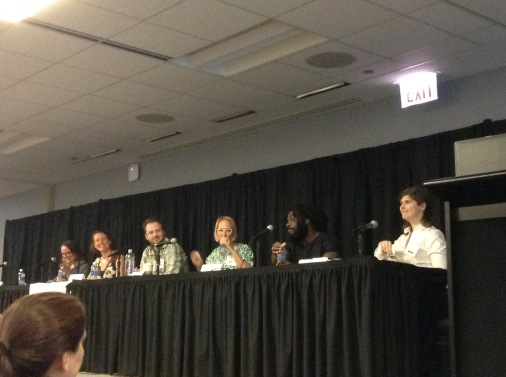 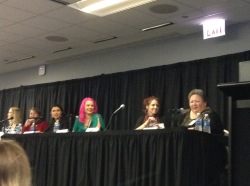 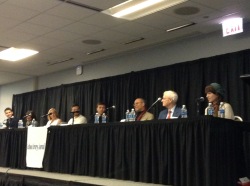 Here’s some of my favorite moments and quotes:

I’m quite sure that I learned and laughed at more than just these bullet points, but this gives you an overview of what happened at the event.  And after all the talking was done, we had a chance to talk with the presenters and collect signatures.  Almost all the presenters were available to sign either galleys or finished copies of their upcoming works that were discussed throughout the day.  I, personally, tried not to be too grabby, knowing that there were more days of books to come.  But that didn’t stop me from speaking with authors and collecting signatures for friends and co-workers (and a certain third grade class). 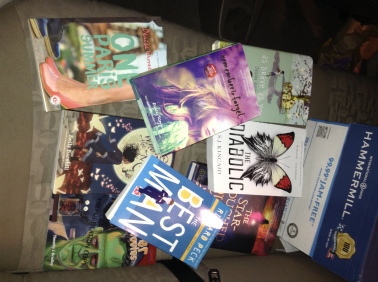 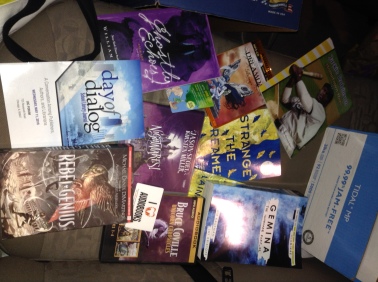 It was a great day of exploration, learning, and sharing.  This was definitely a fun day!  Tune in tomorrow for my run down of today, my first day at BookExpo America.

Today, I start my journey to America’s largest book convention

But first, I have to finish out most of my work day.  And then, traveling!!!  Since I’m only four hours away, I decided to drive.  Most people have told me I’m crazy for this decision, but I’ve planned it out and have very few worries about driving in Chicago.

I double and triple checked all my lists.  Packed extra socks and underwear, because you never know.  And loaded up my car before work, so I wouldn’t waste any time when I clock out.  I even decided to pack my laptop so I can blog about each day of the event (with apologies in advance for any typos or grammar mistakes as I’m sure to be dead tired at the end of every day).

Here’s a quick look at what to look forward to this week:

After all that, I want to do a final wrap-up Sunday night when I return home.  That’s it for now.  Hope to meet lots of new people in Chicago and maybe make some new friends.